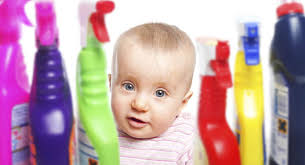 The term poisoning means cells are injured or destroyed by inhalation, ingestion or absorption of a poisoning substance. Children are curious and try to explore their world with all their senses, including taste. Curiosity and the desire to put everything in their mouths place young children at considerably higher risk of exposure to poison than adults. Children are inclined to eating or drinking anything regardless of how it tastes. They tend to like things that smell good and are naturally drawn to attractive packaging and the colorful substances that are found in commonly found household items. When children are exposed to poison, they are more likely to suffer serious consequences because they are smaller (have less body mass), have faster metabolic rates and their bodies are usually not capable of neutralizing toxic chemicals. More than 90% of poisonings occur within the home environment and many common household products can poison children, including cleaning supplies, alcohol, plants, pesticides, medicines, detergents, cosmetics. Substances which are normal for adults like cigarettes and tobacco can prove to be harmful and toxic for children.